My Salvation Story: 3 Lessons I learned As a New Believer 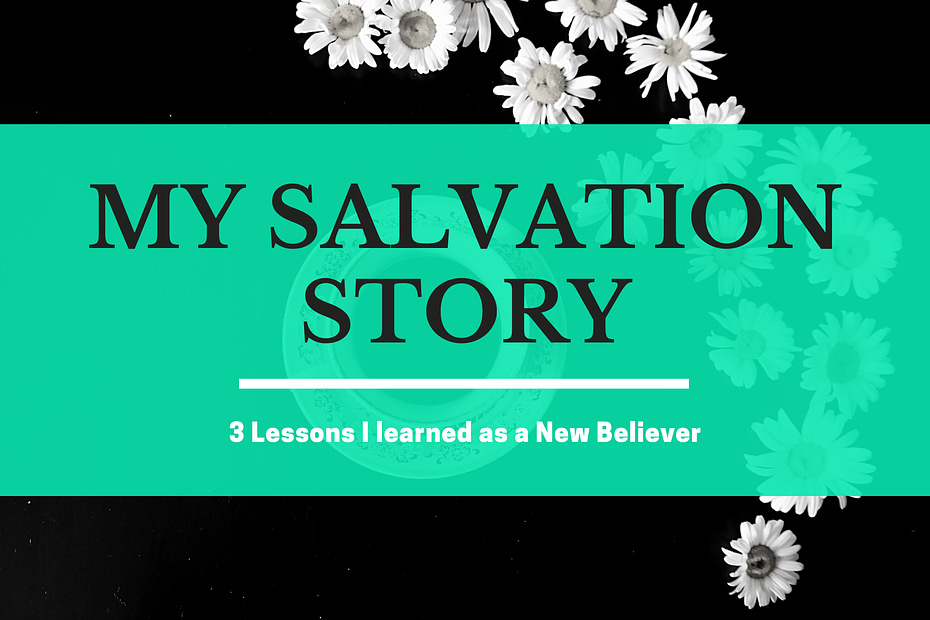 It was on a Sunday. A warm September night during a Weekend Challenge that my High school had hosted. I don’t remember the preacher’s name but I do remember the group’s name. They went by the name, King’s connect.

The group was lively, fun, and the people so gentle and kind-hearted. What stood out for me on that day were the spoken words. The turmoil, the regret, and joy in my heart. Could it be, that a man could die for me? That he could bury my sins, bloat them away as far as the east is from the west?

Truth is, I had heard these words before. Only they weren’t said with such fervor and passion. Nor had they caused my heart to stir as it did. Once when I was fourteen I had given my life to Christ.

In a few months as a new believer, I had nothing to show for it. Because that relationship had never existed. Now as he taught about grace, I was starting to understand why previous attempts at salvation had floundered.

My first failed walk with Jesus

This time, things were different

As he taught about how Christ died for sinners like me, my heart became troubled. Like the emotional person I am, my eyes grew teary as I reflected on my sixteen years of living. Who was I? What was my identity?

Did I really deserve this gracious love, this mercy that Christ was offering?

No! I decided. I was unfit of even the tiniest of mercy. At only sixteen the mistakes I had made were like a pile of filth upon me. Pain and regret submerged me as the word made me realize how much a sinner I was.

“Love.” The preacher said. Christ loved me. He died on the cross for me. He wanted me to lay my burdens on him. That 2000 years back, he had taken my filth, my shame, my pain, and sorrow onto Himself. I could be free of the burden that plagued me if only I believed. I could find hope and eternity in him.

The sinner in me refused to move from my seat as the preacher called forward those who wanted a relationship with Christ. The condemnation was too much. He unveiled my face and His truth was shining light upon me. Such darkness, could he replace it with His light.

I needed love to fill my emptiness

My heart wailed. I needed this love. A conviction so strong made me get up from my seat. One step after another, I moved forward, as the preacher said, “He died for you. He washed away all your sins. He is calling you to the table. Come have light and love. Come receive salvation.”

Tears filled my eyes, fell onto my cheeks as I took a step after another. I had searched for meaning for so long. Here was the Holy Spirit calling me forward. I wanted to leave the darkness behind. The preacher said I was a child of God.

I wanted to be one. I needed this gracious, unconditional love, the King of kings offered me. My heart longed for his loving arms around me because I had felt empty for so long. I had battled many battles, lost so many, Had no identity, and was floating, instead of living.

I said yes. To living for Christ. Yes to obedience. Yes to love, grace and mercy. And yes to a lighter burden.

For the first time in my life, I felt like I knew God, even if it was only a small part of Him as I would later discover. Though I was raised in the church, this was the first time I discovered the true price that Christ paid. It was the time I started realizing my identity in Him.

When you are unveiled and the truth hits you like a truck(In a gentle way), you realize the many wrong things in your life. But you also realize the countless blessings and mercy that God has bestowed upon you.

After the weekend challenge, I felt so renewed. Something had changed for the better. These were the most important lessons I learnt as a new believer.

My salvation story lesson 1: I was a new creation

For the first few months, Ist Cor 5: 17 played a vital role in my life. I was still struggling with guilt because I had not fully understood the meaning of the cross. It was finished. He had paid it all. Christ, by crucifixion on the cross, had washed me clean.

Now for those who are in Christ, the Old is gone, and the New has come.

I still made mistakes, but unlike the first time, instead of cowering from His presence, I ran to Christ and I stayed at His feet. Also, I had to unlearn what repentance was, and what mercy entailed.

I learned that I couldn’t wing my way up to salvation. Because, without Christ, I was powerless of defeating my sin. It was only through mercy and grace that I could do it.

My Salvation Story lesson 2: It was not going to be perfect

In all truth and honesty, I thought it would be pure bliss and happiness all the time. Boy, was I wrong! Some days were extremely hard, and on some, I doubted God’s love.

But I was shown by the bible this was how salvation works. “That suffering is part of the salvation journey.” Most importantly, I learned that God always loved His people. And not a single day would His love ever change.

My salvation Story lesson 3: Obedience was going to be hard

I’m stubborn. I don’t like leaving my comfort zone. To some extent I hated it. All this was soon to change. A relationship with Christ is not a place to be comfortable. (Don’t confuse it with being content and at peace.)

Sometimes, I had to let go of the things I thought were important. Other times, I had to forgive people who had hurt me. On most days, I needed to humble myself.

Four years later, obedience is still a struggle. But in all things, I seek God’s grace to pull through my stubborn times.

The final and most important lesson from my salvation story was to realize, how deeply, immensely, and unconditionally God loved me. This love is what keeps me going through the tough times. It’s the reason why I persevere and hunger for more of Christ in my life.

Finally, my salvation story or yours will not be perfect. It’ll be hard, happy, but mostly beautiful. Because a relationship with Christ is the absolute best thing that could happen to you.

Can you recall the first time you started a relationship with Christ? It’d be uplifting to others if you shared it in the comments.

Pin me for later

previousWhat Is The Gospel of Christ And Why Should It Matter To You
nextWhat Happens When You Get Saved: 5 Transformations By a New Believer